NDC’s next generation chemical etching process has the ability to selectively remove the thermal oxide from the surface of components without dissolving oxide inclusions. The result is an exceptionally smooth, uniform surface layer free of thermal oxide which is ideal as a final process or for subsequent surface processing steps such as electropolishing. The recent study analyzed 36 diamond coupons, made of standard SE 508 tubing, each of which contain two apices at risk for fracture. Mean and alternating strain targets were calculated from Finite Element Analysis and extrados fatigue loading levels were chosen to produce tension-tension fatigue fractures below 10 million cycles. These diamond coupons were compressed to create tensile-tensile fatigue loading on the extrados, representative of medical device loading conditions, and cycles to failure were recorded. Kelly Pike, Sr. Scientific Fellow Consultant, conducted the tests and noted that, “Kaplan Meier analysis demonstrated that coupons treated with the new etching process had superior survival to the control group at 10 million cycles.” Additionally, in the group treated with the new etching process, only 1 failure occurred out of a sample size of 36. NDC believes that this process will improve fatigue resistance for applications requiring robust performance in the 400 million – 600 million cycle range. 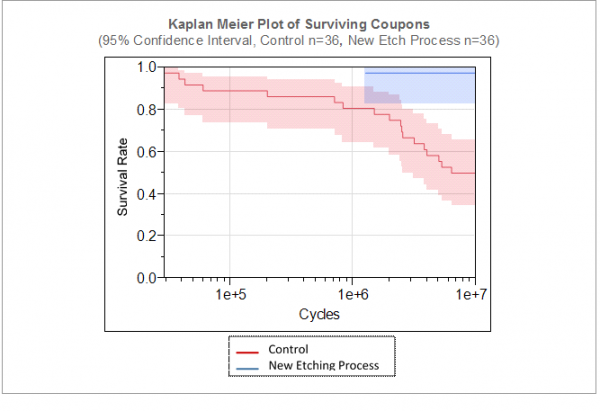