NDC is conducting an ongoing study in conjunction with the U.S. Food and Drug Administration (FDA) to understand the effects of oxide layer composition and radial compression on corrosion resistance and biocompatibility of Nitinol medical devices. Nitinol is commonly used in medical devices including peripheral stents, stent grafts, and heart valves, due to its superelastic and shape memory properties. While previous studies have shown the significance of surface processing on oxide layer composition and its effect on localized corrosion behavior in Nitinol, the impact on nickel ion release and biocompatibility has yet to be studied. The first phase of the study focuses on filling this knowledge gap by investigating the relationship between post-manufacturing surface composition and the impact of post-manufacturing handling, to effectively simulate the impact of loading implantable devices onto a delivery system, on in-vitro corrosion behavior. 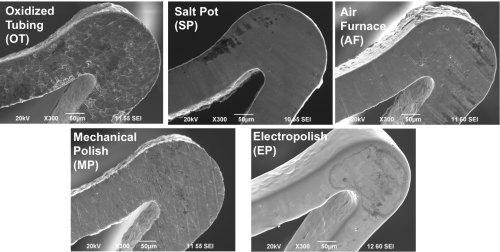 Christine Trepanier, Sr. Director Process Engineering noted, “This study is the first to establish the complex relationship between oxide layer composition and its impact on nickel ion release. We’re currently working on the next phase of the study, which investigates the biological effects of Nitinol’s oxide layer composition systemically and locally on arterial vessels in animals. The study is expected to conclude in mid-2016.”